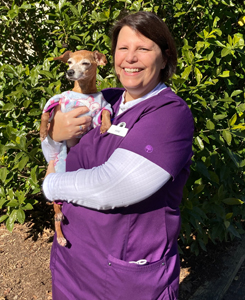 Anne grew up in Goldsboro, a small town in eastern North Carolina and had a wide variety of pets growing up, including dogs, a duck, a pig and even a white mouse. Anne attended the University of North Carolina in Chapel Hill and received her Bachelor of Arts in Journalism, Advertising. Anne spent the next twenty plus years working in advertising, sales, marketing and human resources up and down the east coast. She never knew she would be lucky enough to work in a veterinary hospital!

Outside of the animal clinic, Anne spends her time running, gardening and cooking for friends.

Bristol was born and raised in Durham, North Carolina. Bristol was an original staff member at MAH back in 2015 and has returned to run Reception after several years at VSH/Blue Pearl administering chemotherapy in Oncology.  Bristol has also spent 5 years working with Wake County Animal Shelter.  Outside of the clinic, Bristol enjoys her time traveling to the beach with family & Luna. 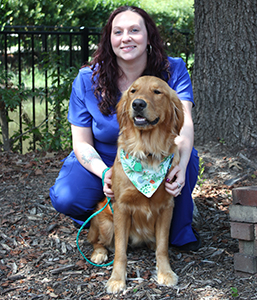 Jess was born and raised in Georgia. She recently moved to North Carolina with her 3 children in October 2018. Jess went to school in Georgia for nursing but soon realized that animals were her passion. She has been involved with animals since elementary school helping with rescues and shelters which caused her to pursue her career in the animal field. In her spare time she enjoys spending time with her family and friends fishing, having cook outs, and having lazy Sundays at home watching movies with her kids and fiancé and cooking Sunday dinner.

Furry friends: Tara (the diva), a 5 year old Staffordshire Terrier, Teddy Bear hamster named Chubbs and a tiny Russian hamster named Storm. She also has Lola, an 8 year old pit mix that is living with her sister in Ohio to help with her rescue dog’s anxiety, and 2 rescue cats Oreo and Spazz that live with her aunt in Georgia due to too much stress on them while moving. They are now happy spoiled house cats. 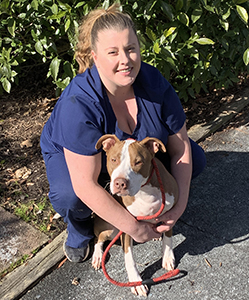 Michelle was born and raised in southern California. She moved to North Carolina in 2017. Michelle has a longtime love affair with animals and is studying to become a Registered Veterinary Technician. In her free time, she loves to go camping, hiking, and spending time with friends/family.

Shelly was born in Long Island, NY and came to North Carolina in 2008. She started in the veterinary field in 2013 as an assistant. In her free time she enjoys practicing Krav Maga, running and hiking and being a homebody. 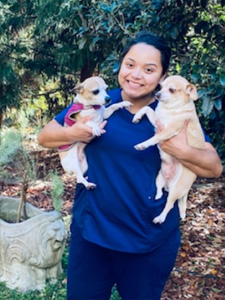 Evelyn has been a lover and healer of animals ever since she was a child. Growing up she always knew that her future career would be in the animal field whether it was to be a veterinarian for the military, to being an animal cop or a K-9 unit cop, all the way to being a dolphin trainer at Sea World. She loves helping animals whether it’s her at work or climbing 12ft trees to save a stuck cat. In 2013, she started her career at Carrington College – Pomona to become a veterinary technician. in 2014, she welcomed her first child into the world on Sunday, July 20, 2014 and was back in class on Monday, July 21, 2014 to complete a midterm test. She graduated in the summer of 2015 as a veterinary technician. Now she shares her love for animals with her 7 year old daughter. At home they care for 2 dogs, 1 cat, and a fish named Pinkalicious. When Evelyn isn’t working she is at rugby practice or playing a game with The Raleigh Venom Women’s Rugby Team.

Margaret graduated from the University of North Carolina with a degree in biology. Her experience in animal care extends to her childhood, when she was known as the neighborhood petsitter. When she isn’t busy focusing on her patients, she likes to go on trail rides, peruse the NC farmer’s market, or just sit on the couch and watch some sports! 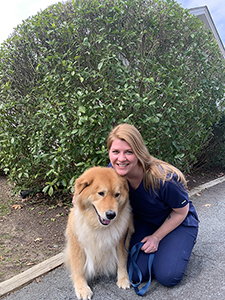 Madeline grew up in New Jersey and always had a love for animals. She had cats and pocket pets growing up, as well as a love for riding horses and working in the stables. After graduating from Drew University, she lived in New York City before settling down in Chapel Hill.

Outside of the hospital, Madeline loves the gym, cooking, reading, and goat yoga.